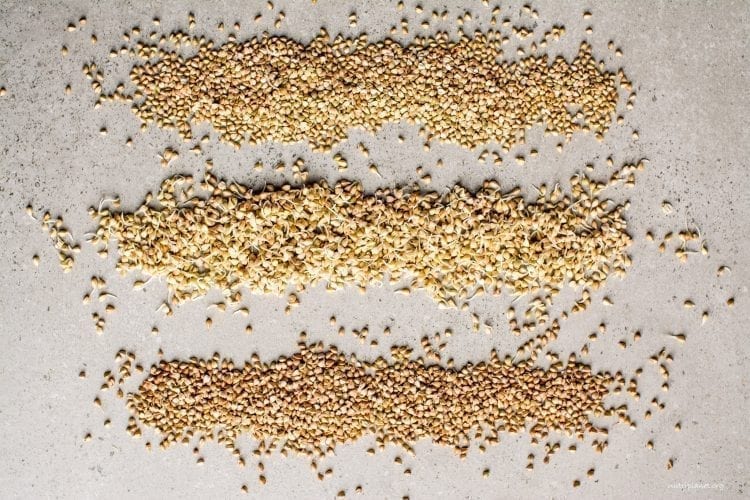 What is sprouted buckwheat anyway? It’s when you take raw buckwheat groats, soak them and let the sprouts grow. Basically you’re sprouting buckwheat seeds that would grow into new plant on the field.

Like all other grains, nuts and seeds, also buckwheat contains enzyme inhibitors that interrupt with vitamin and mineral absorption and cause digestive ailments. Therefore, at least soaking is required to make them more digestible.

Sprouting however, takes you to a completely new level as sprouts use the starches to grow, hence decreasing the glycemic load of buckwheat or any other grain. Therefore making them beneficial for anyone struggling with Candida overgrowth or blood sugar fluctuations.

How to eat sprouted buckwheat

You’ll see that the sprouts are such versatile ingredients and have many uses! I’m sure you’ll even come up with your own recipes.

In short, you can use them in any recipe that uses soaked buckwheat. Just don’t let the sprouts grow too long – a few millimetres is good to substitute soaked groats.

Here are my favourite ways to use and eat sprouted buckwheat:

As you can see, there are many recipes to choose from. You definitely should not get bored, tired or be out of ideas when it comes to using up a batch of sprouts.

Let me know in comments whether you have tried sprouting buckwheat or any other grains/legumes before! I’d love to hear from you!

How to Sprout Buckwheat