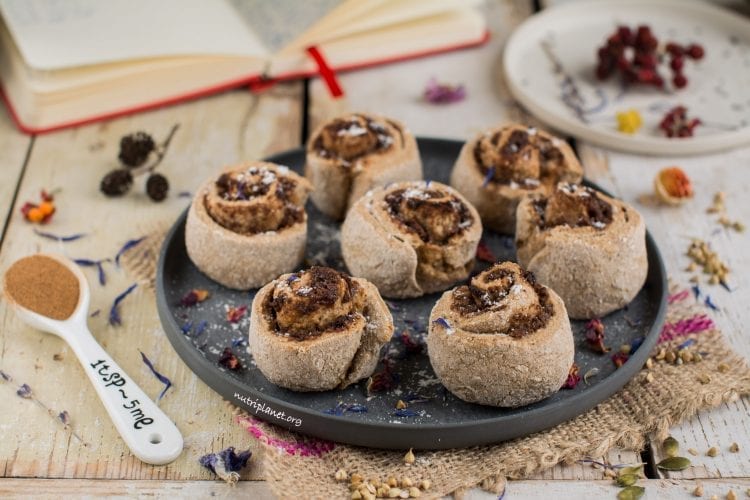 I have good news for those looking for no yeast cinnamon rolls as I’ve finally nailed it. Furthermore, my vegan gluten free cinnamon rolls are also suitable for those on vegan Candida diet, so definitely keep reading!

Now, what I meant by finally nailing it was that it took me 4-5 goes to perfect those vegan cinnamon rolls. As for fluffiness you can’t quite compare my no yeast cinnamon rolls with the recipes using yeast. However, they are soft and yummy nonetheless!

I think you know that besides being tasty, all my recipes also need to be healthy and Candida diet friendly. That being said, contrary to store bought varieties and to many recipes that you find online, my vegan gluten free cinnamon rolls don’t contain melted butter (vegan or not), coconut oil, powdered sugar or even brown sugar. Furthermore, my cinnamon buns are also egg free and of course dairy free.

Which flours did I use, you might ask. Well, I went for raw buckwheat flour, brown rice flour and gluten free oat flour. The latter you can also easily grind from gluten free rolled oats. My first attempt was with buckwheat and oat only, but the outcome was a bit too bread like. Now, I tried using a bit less buckwheat and more oat flour the next time, but the oat flour just didn’t do that good job in terms of elasticity.

In other words, it was difficult to roll it out nicely. And then came the third attempt when I substituted half of the buckwheat flour with rice flour and that was it! However, I had to give it another try because I only had white rice flour at home at that time. So, I needed to make sure it worked as well with brown rice flour. And it did!

As far as the filling is concerned, I went for a paste like substance the first time. It was too liquid though and escaped the rolls in the oven. At the end I created a crumble like filling which works the best. So, how did I do without butter? It’s easy actually – I used nut butter instead. You can use any nut butter you like, i.e. peanut butter, almond, hazelnut, or cashew. However, I wouldn’t recommend tahini as it tastes a bit too strong for cinnamon rolls.

And finally, what holds it all together? Now, there is a divine ingredient I discovered only recently and that’s psyllium, either as husks or in powder form. In this recipe powder works the best though making the dough super elastic and easily processed.

So, what are my no yeast cinnamon rolls all about?

To sum it all up, my no yeast vegan gluten free cinnamon rolls make a perfect lazy breakfast, snack or even a dessert. You can make a bigger batch and store the rolls in freezer. Whenever needed, take one out, give it one minute at 450W in microwave (or heat up in oven) and you’ve got yourself an easy and filling bite.

And finally, please let me know in the comments below and please tag me in social media whenever you try one of my recipes! I’d love to see your creations! Instagram @thenutriplanet and Facebook @nutriplanet.health.hub

I have good news for those looking for no yeast cinnamon rolls as I’ve finally nailed it. Furthermore, my vegan gluten free cinnamon rolls are also suitable for those on vegan Candida diet, so definitely keep reading!

You can leave the rolls as they are or you can glaze them with my vegan caramel sauce or vegan Royal icing.