In this category you’ll find delicious and healthy plant-based low-glycemic recipes that won’t wreak havoc on your blood sugar levels. These recipes are also suitable for everyone living Candida-free. That is people who have passed the cleanse phase and are reintroducing foods back into their diet.

It can be a challenge to find plant-based low-glycemic recipes online. It’s because most vegan recipes contain high-glycemic foods such as flours, dried fruits, sugars and other processed foods.

My plant-based low-glycemic recipes are mostly made of the low-glycemic foods. Those foods are leafy greens, vegetables, tubers, nuts and seeds, berries, fresh fruits, as well as whole grains and legumes.

You’ll find me baking with whole groats instead of flours and sometimes even sprouting my lentils, beans and grains before using them in a recipe.

What Is a Low-Glycemic Diet?

You’re eating a low-glycemic recipes, if you don’t get more than 20 GL points from one meal and not more than 100 GL points daily.

You’ve probably seen the abbreviation GI (glycemic index) before on food packages. This tells you whether the carbohydrate in the particular food is a “slow” or “fast” type of carbohydrate.

What glycemic index doesn’t do is indicate how large the proportion of the carbohydrate is and how it’ll affect your blood sugar levels. The deficiency has led nutritionists towards the development of the improved index GL (glycemic load), which is the GI multiplied with the regular helping (portion) of the particular food. This index enables you to obtain a much better idea of the actual impact on the blood sugar level.

If you’re interested to learn more about low-glycemic recipes, read The Guide to Low-Glycemic Diet. Learn how to make truly healthy vegan sweet potato brownies that are also low glycemic, low-fat and gluten-free. You’ll need 9 ingredients, a food processor, and 20 minutes of your time. What I love about this recipe: Chewy and moist deliciousness. Easy to make brownie recipe. Makes a perfect meal […] 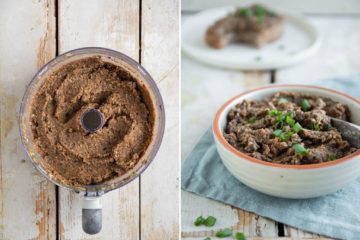 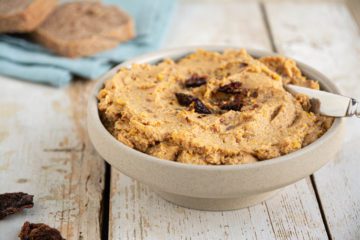 Learn how to make a delicious and easy soybean hummus recipe without tahini. Enjoy the sweetness from corn as well as the divine flavours of sun-dried tomatoes and dried basil. You’ll need 9 ingredients and a food processor to make this creamy homemade hummus. What I love about this recipe: […] 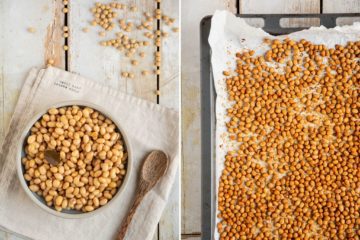 How to Cook Soybeans and Make Dry Roasted Soybeans

Learn how to cook soybeans at home in a regular pot or a saucepan. Use the cooked soybeans for high protein hummus, in soups, stews, and salads, or nibble on them as they are. Furthermore, learn how to make dry roasted soybeans for a tasty low glycemic healthy snack. What […] 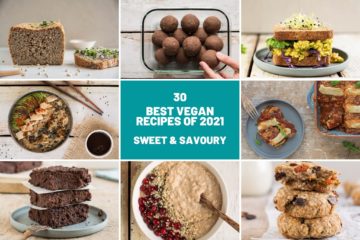 The Best Vegan Recipes of 2021 Learn how to make cooked sauerkraut recipe with beetroot and dates for a delicious, sweet result without refined sugars. It’s a perfect side dish for Christmas dinner or simply to be enjoyed on a regular weekday. What I love about this sauerkraut recipe: Short prep time. Heavenly vegan festive side […] Learn how to make an easy vegan mustard dipping sauce that is perfect for dipping dumplings, baked potatoes, tacos, and raw veggies. It’s one of those quick and easy recipes that require no skills and minimal time. What I love about this recipe: Comes together in just 3 minutes. Doesn’t […] 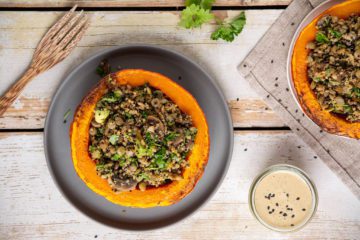 Learn how to make delicious and hearty festive vegan stuffed pumpkin with lentils, quinoa, and mushrooms. Moreover, my creamy and herby cashew-miso dressing will make this dish extra luscious. What I love about this recipe: Perfect for vegan Christmas and Thanksgiving dinners or any other autumnal and wintry festivities. Made […]