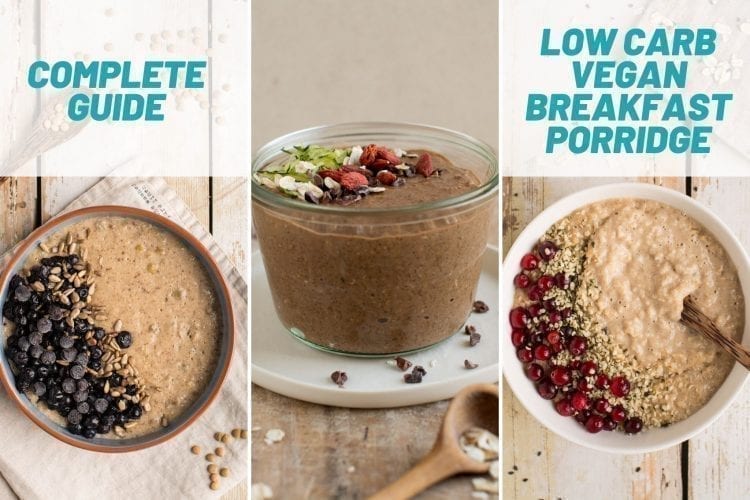 Start your day with low carb vegan breakfast porridges that don’t compromise with taste or portion size. Get familiar with the simple knowledge about low glycemic foods and become a master of low carb vegan recipes for breakfast.

Let’s be honest, it’s not the carb count that you need to avoid, but the quick carbs found in refined foods such as white flour and refined sugar. It’s important to note that complex carbs are essential for our bodies to function. In fact, studies consistently find that populations eating diet higher in carbs and lower in fats and protein, have better moods and less anxiety. (1)

However, eating too much of complex carbs at one go can be problematic for people struggling with blood sugar fluctuations and/or Candida overgrowth.

Who should consider low glycemic or low carb vegan breakfast

You could ask yourself the following questions:

If you answered yes to even just one of the above questions, you could benefit from trying out a low glycemic or low carb breakfast.

What Is Low Glycemic Diet?

In a nutshell, you’re eating a low glycemic diet, if you don’t get more than 20 GL points from one meal and not more than 100 GL points daily. And no, it has nothing to do with vegan keto diet! It’s about embracing healthy foods that nourish your body.

I’ll show you how easy it is to exceed those points. For example, 100 grams of rolled oats (dry weight) give 39 GL points. Now, many people make their oatmeal with 60-80 grams of oats. Simple calculations tell you that this translates into 23.4-31.2 points. After adding the fruits or even syrups and other toppings and you’re way above the suggested maximum.

Read more on glycemic load and index as well as limitations associated with both from Low Glycemic Diet. For example, glycemic load values are affected by preparation method, ripeness of a fruit, food combining as well as individuality.

Now, we’ve drifted far away from the low carb breakfast porridge recipes. So, let’s get onto it!

How to Make a Low Carb Vegan Breakfast Porridge

What you can use as naturally low carb and low glycemic bulk components:

Despite the limitations associated with glycemic load, I need to generalize a bit to give you guidelines within which you can start experimenting.

So, we want your porridge bowl with all the toppings to have less than 20 GL points. Hence, let’s leave about 7 points for toppings as well as add-in’s and calculate our bulk ingredients with 12 GL points.

Now, if you’re used to making your porridge with 70-100g grams of rolled oats, then 30g seems a very tiny portion. However, by combining the regular grains with oat bran and/or unhulled lentils, the result is much better.

How to decrease the glycemic load of grains

Sprouting is a great option to bring down glycemic load. Dive into the following posts and videos: How to Sprout Buckwheat and Guide to Sprouted Chickpeas. You can sprout buckwheat, rice, quinoa, amaranth and lentils (from the list above).

Let them cool after cooking. Starchy veggies, grains and legumes develop resistant starches when they’re cooled after cooking. In fact, cooking and cooling (best overnight) increases the resistant starch content. However, if reheated the effect is lost. Resistant starch is a type of carbohydrate that our digestive enzymes cannot break down in the stomach or small intestine. They, therefore, reach the colon intact, “resisting” digestion and feeding our good bacteria as well as keeping blood sugar stable, among other things.

Considering the latter, it’s not a good idea to cook rolled oats that have already been heat treated during manufacturing. So, this is why overnight oats would be a wiser idea.

In case you need even more bulk, add (choose one or combination of many):

In case you prefer sweet porridges to savoury ones, I’d suggest the following low glycemic sweeteners:

A traditional native American food with a very low GI and a high mineral content. Mesquite powder or flour is made from the leguminous seed pods of the drought-tolerant mesquite plant, also known as algarrobo. It can be used as a flour or a sweetener, and it has a caramelly and nutty flavour.

Made from the dried pods of the carob tree. One of the benefits of carob powder is that it’s a caffeine-free ingredient that can be used as a replacement for cacao powder in brownies, cookies, cakes and smoothies. Carob is less bitter than chocolate and has a roasted, naturally sweet flavour. For this reason carob chips are made without added sugar.

A natural low-calorie sugar alternative, derived from real monk fruit. Also known as Luo Han Guo, monk fruit is a small melon native to southeast Asia. The fruit is very sweet, due primarily to naturally occurring antioxidants known as mogrosides, which give a cleaner and more intense sweetness.

Monk fruit powder is 200-250 times sweeter than table sugar, so a little goes a long way! This all-natural sweetener has a caramelised toffee fruit flavour, which makes it the perfect substitute for honey. Plus, there’s no bitter aftertaste.

Derived from the yacon root, a South American tuber that tastes like an apple. Its health boosting properties and taste have been appreciated in Peru and other South American cultures for centuries. Yacon has been enjoyed as a valuable health food because it contains a prebiotic called inulin. The latter feeds the healthy bacteria (probiotics) in your gut. Yacon powder is mildly sweet and can be used as a low calorie sweetener mixed into drinks and smoothies or as a healthy sugar substitute in recipes.

A sweetener and sugar substitute derived from the leaves of the plant species Stevia rebaudiana, native to Brazil and Paraguay. The active compounds are steviol glycosides, which have 30-150 times the sweetness of sugar, are heat-stable, pH-stable, and not fermentable. The WHO considers up to 1.8mg of stevia compounds per pound (453g) of body weight to be safe amount. In other words, drinking up to two stevia sweetened beverages a day should be considered harmless.

Xylitol looks and tastes like sugar but has fewer calories and doesn’t raise blood sugar levels. It is a sugar alcohol, that is found in small amounts in many fruits and vegetables and is therefore considered natural. Since xylitol is still a refined sweetener, it doesn’t contain any vitamins, minerals or protein. In that sense, it provides only empty calories. Even though sugar alcohols are technically carbohydrates, most of them do not raise blood sugar levels and thereby don’t count as net carbs, making them popular sweeteners in low-carb products. (2, 3)

Though the word “alcohol” is part of its name, it’s not the same alcohol that makes you drunk. Sugar alcohols are safe for people with alcohol addictions.

NB! Be careful not to over consume as it may cause digestive ailments. Since xylitol is sugar alcohol, it can cause digestive issues. Due to their unique chemical structure, your body can’t digest them, and they pass unchanged through most of your digestive system. When they reach the colon, they are fermented by the resident bacteria, which produce gas as a side product. Consequently, eating high amounts of sugar alcohols may cause bloating and digestive upset.

Like xylitol also erythritol belongs to a class of compounds called sugar alcohols. It has about 70% of the sweetness of sugar. In large-scale production, erythritol is created when a type of yeast ferments glucose from corn or wheat starch. Overall, erythritol appears to be very safe. (4, 5)

It’s because erythritol is different from the other sugar alcohols. Most of it gets absorbed into the bloodstream before it reaches the colon. (6) About 90% of erythritol is excreted in the urine. (7)

However, eating high amounts may still cause digestive upset as the remaining 10% travels down to colon. One study showed that 50 grams of erythritol in a single dose increased nausea and stomach rumbling. (8)

However, feeding studies providing up to 0.45 grams per pound (1 gram per kg) of body weight show that it is very well tolerated. (9, 10)

So, unless you’re eating massive amounts at a time, you’re unlikely to get an upset stomach.

Unless you prefer to make savoury porridge, fruits or berries are an essential component of a balanced porridge. You don’t need to worry as there’s plenty of variety to choose from:

A few tips on fruits and berries:

Finally, how do you actually make a delicious porridge with all those restrictions? Well, I have three low carb vegan breakfast porridge recipes for you that’ll make you change your mind about low glycemic food.

Disclaimer: this post contains affiliate links. As an Amazon Associate I earn from qualifying purchases. For every purchase made from the links in this post, you’ll be able to support my work. So you can look after your health, and contribute to my mission at the same time. Thank you!