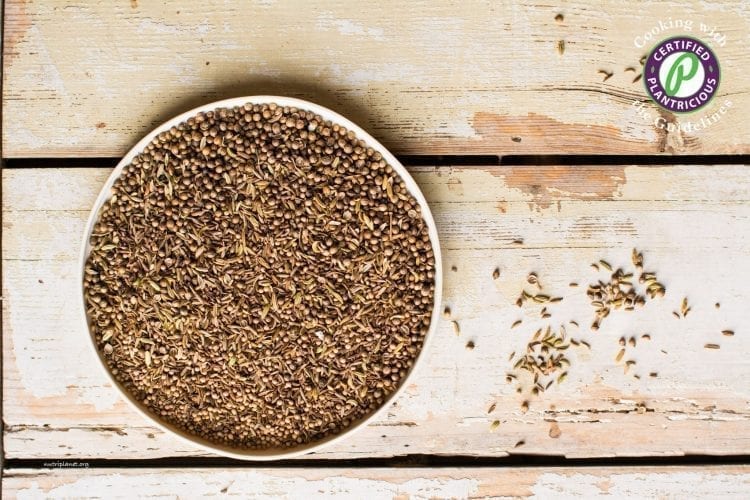 Here’s an aromatic mix of dry-roasted and ground Indian spices ready to be used in soups, stews, curries, rice dishes or even sprinkled on top of salads. Be ready for explosion of flavours!

I love Indian cuisine and its spice mixes to the extent that hardly a day goes by without Indian recipes. When I think of Indian dishes it’s all about the herbs and spices blended together in perfect harmony that appeals to me. All those curry powders made of dry-roasted and ground spices simply lift me up as soon as I smell the flavours. A few of my favourite spices include fenugreek seeds, coriander, cumin, caraway, fennel, and mustard seeds.

In this article, besides the recipe of my favourite basic Indian spice mix, you’ll be able to read about:

Those must-have seeds carry a warm flavour with slightly fruity citrus undertone. It’s always better to toast coriander seeds to release the flavour. Should you be obsessed with garam masala blend, then know that coriander seed is a key element in the mix. Coriander is also believed to settle an upset stomach and be good for digestion.

Whole coriander is used as a base for many spice mixes, and ground coriander is one of the most commonly used ground spice in Indian cuisine.

These flavourful seeds are earthy and nutty, with a slightly grassy undertone. Many Indian curries call for this strong and aromatic spice. Like most Indian spices, it plays well with others.

Cumin is best used freshly ground for the most intense flavour. One thing to keep in mind while dry roasting this spice is that it burns really easily, and burnt cumin tastes very bitter.

The caraway fruits have a pungent, anise-like flavour and aroma. Also, they resemble cumin and it may happen that the two are often confused.

It is suggested to add seeds after a dish is cooked, as a long simmer may turn the flavour bitter. Caraway can also be used in cakes, cookies, soups, omelettes, rice and pasta dishes, cheese spreads and vegetable dishes. And lastly, it is also an important addition to Indian garam masala blend.

As far as storage is concerned, caraway seeds can hold their flavour for months if stored in airtight containers away from light.

Those seeds have a warm and sweet aniseed-like flavour. The liquorice-like flavour is often used in the curry blends of Kashmir and Northwestern India. Furthermore, fennel seeds work wonders on easing the digestion.

Black mustard seeds are stronger in flavour than the yellow or white ones, which are used to make the yellow mustard that’s common in Europe and America. There’s also a brown mustard seed.

The flavour of mustard seeds is released when they are crushed. Their smoky, nutty flavour is a staple in curries and curry powders, and mustard oil is commonly used in the North of India.

There is green and black cardamom. Black cardamom pods are larger and darker than green ones, with a peppery, smoky flavour.

It’s important to note that cardamom is a “less is more” spice. So, use with caution, or it can mask milder flavours in your dish. This is one spice you should keep in the freezer—it loses freshness quickly. Alternatively, you can buy whole pods and grind them whenever needed.

Here comes one of my favourites: turmeric! This common Indian spice is vivid and yellow giving many Indian dishes their characteristic colour. A relative of ginger, the spice is known for its anti-inflammatory properties as well as its flavour and colour in curries.

The flavour of fresh turmeric is slightly stronger than dried, and it stains very easily, so make sure you are careful with your clothes and utensils while using it. Check my Golden Latte recipe with fresh turmeric. Turmeric powder, however, is one of the key ingredients in my anti-inflammatory shot.

Fresh ginger gives delicious, peppery flavour to recipes. However, you can also use dried and ground ginger in recipes as well as for tea. As fresh ginger spoils pretty quickly, wrap a chunk of peeled ginger root tightly and store it in the freezer. Then, you can grate what you need right into the pot.

Clove is a common spice in Indian cooking and its anise notes are easily recognisable in many Indian dishes. The strong flavour of clove comes from the concentration of essential oils. Cloves can be used whole or blended into spice mixes. They do need to be used with caution, however, as they can tend to overpower more delicate spices. Clove is also an important ingredient in my gingerbread spice mix.

This heavenly spice adds a delicate sweetness to savoury recipes and desserts. Ceylon cinnamon is more expensive than cassia and is the real deal. If you buy supermarket ground cinnamon, you can’t tell which type you’re getting, so it’s good to order from a source that distinguishes between the two.

Cassia has a stronger and spicier flavour, whereas Ceylon cinnamon is credited to being antioxidant-rich and good for reducing cholesterol and stabilising blood-sugar levels. If you use cinnamon a lot on daily basis, go for Ceylon. It’s because Cassia variety contains significant amounts of a compound called coumarin, which is believed to be harmful in large doses.

Black pepper is actually native to India, primarily from the Western Ghats and Malabar region. Like most spices, black pepper needs to be toasted before blending. However, fresh black pepper can also be ground directly into dishes.

Whether whole, crushed, or ground, peppercorns add a more subtle heat than you’d get with the chili de Arbol, (unlike spicy chillies, peppercorns don’t contain capsaicin, the compound that gives that traditional chillies their heat).

This leafy spice is an excellent source of minerals like copper, potassium, calcium, manganese, iron, selenium, zinc and magnesium as well as vitamin A. Store bay leaf in airtight jar or container and keep away from direct light. Since they lose flavour early, don’t keep laurel leaves for longer than a year. Store them in the freezer and they’ll last for years.

Finally, add bay leaves when you cook legumes and grains to add flavour and make them more digestible.

They taste bitter and sweet at the same time. Use ground fenugreek seeds in curry powder, spices blends, dry rubs, and tea blends. A pinch can also be sprinkled over yogurt, cooked greens, or sauce.
Just like cloves, fenugreek seeds are also strongly fragranced and you should use them with caution.
As for the health benefits, fenugreek seeds are believed to be anti-inflammatory, antioxidant, antimicrobial, and anti-diabetic, to name a few.
Some sources recommend soaking fenugreek seeds overnight before toasting.
Store whole and ground fenugreek in airtight container, in a cool, dry, and dark location for up to six months.

And finally, to spice things up, there are thousands of varieties of chilli peppers. While Kashmiri chillies are good for colour and flavour with low levels of spiciness, the south Indian chilli peppers offer a real spice kick for chilli lovers.

A safe way to go while making Indian dishes would be to pick green/red Cayenne chilli pepper, Thai green chilli pepper or Serrano pepper. You can either use whole fresh, whole dried or dried and ground (a smooth powder) chilli peppers.

Dry-roasting Indian spices before cooking and/or grinding is good for a number of reasons:

You can use my basic Indian spice mix in many types of dishes, e.g. soups, chowders, stews, curries, rice dishes, lentil loaves or even sprinkle on a salad.

I’d love to hear what you think of my Indian spice mix and which spices you’d add yourself! Let me know in the comments below! Also, I’d be thrilled to connect on Facebook, Instagram and/or Twitter. And don’t forget that I have YouTube channel as well!

Here’s an aromatic mix of dry-roasted and ground Indian spices ready to be used in soups, stews, curries, rice dishes or even sprinkled on top of salads. Be ready for explosion of flavours!

How to dry-roast Indian spices

The best way is to toss whole spices in a dry skillet, stirring and tossing frequently over medium heat, until they begin to smell toasty and fragrant.

How long to toast Indian spices:

What you can add to my basic Indian spice mix while cooking:

How to store Indian spices: