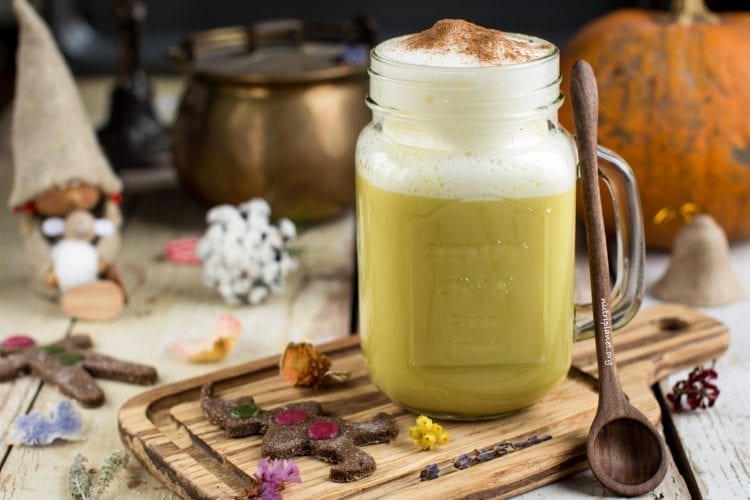 Golden milk or turmeric milk is one of my favourite drinks during the cold season. Usually it is prepared with turmeric powder and other spices, such as cinnamon and ginger. However, I make my golden milk recipe with fresh turmeric root and ginger.

Why is my turmeric golden milk so awesome?

How to enhance curcumin absorption?

Now, black pepper and coconut milk are in my golden milk recipe for a reason. Namely, they both enhance curcumin absorption. Piperine is the ingredient in black pepper, that’s said to help make curcumin more bioavailable, even by a whopping 2000%. Even just a little pinch of pepper can significantly boost levels.

In coconut milk it’s the fat that does the job, as curcumin is fat-soluble. Furthermore, consuming turmeric in its whole form (fresh root or dry turmeric) also boosts its absorption due to the presence of natural oils found in turmeric root and turmeric powder.

However, as in my golden milk recipe the turmeric root itself will not be consumed, I prefer to add coconut milk for its fat.

How to consume the leftover ginger and turmeric root slices?

Most noteworthy is that I don’t need to add any sweetener into my golden milk cup, as there’s enough sweetness from oat milk. However, should your palate be used to sweeter flavours, feel free to add a sweetener of choice.

Please tag me in social media whenever you try one of my recipes or leave a comment bellow if you have any questions! I’d love to see your creations! Instagram @thenutriplanet and Facebook @nutriplanet.health.hub

Golden milk or turmeric milk is one of my favourite drinks during the cold season. Usually it is prepared with turmeric powder and other spices, such as cinnamon and ginger. However, I make my golden milk recipe with fresh turmeric root and ginger.

Disclaimer: the recipe contains links to products that I recommend and that meet my requirements.