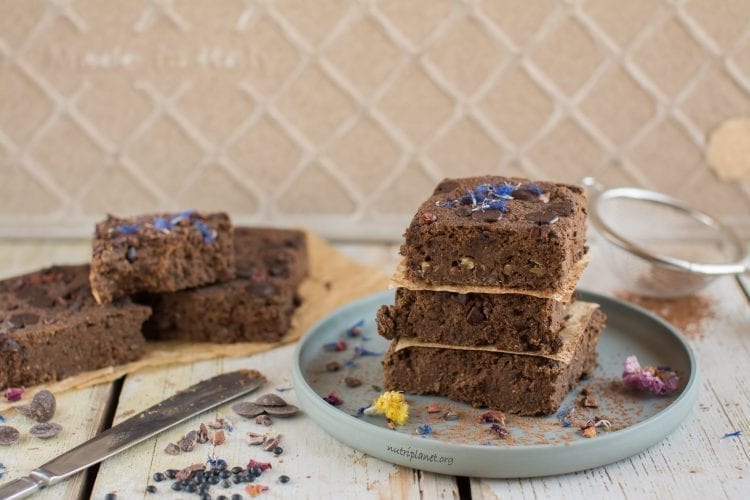 I have a story that goes with those brownies. One afternoon my 8-year-old had his classmate over and obviously I had to feed them with something. So, I decided I’d make those paleo brownies. When they were out of the oven and cooled a bit I asked the boys to come and eat. The friend was suspicious at first (I didn’t disclose the ingredients), but then decided to try a small piece. Having finished this piece, he asked for a second one saying that it was pretty yummy. Having finished the second piece, he asked for a third 🙂 After they had played for a while, he came back asking for more… and then again 🙂 Needless to say, the brownies were finished by the time he went home.

My first try with grain-free brownie recipe was absolutely delicious, but the pieces fell apart quite easily. It was because I left rolled oats out of my base recipe (Lentil Brownies), but didn’t think about bringing in another binding agent. In this version of my vegan paleo brownies, the binder is psyllium husk powder that really does its job so well. In fact, you can lift up the whole brownie without breaking it apart.

Next, I used sprouted and boiled lentils as the main mass for those paleo brownies. By all means, you don’t need to go as far as sprouting, but it does make the brownies even more blood sugar friendly by reducing the glycemic load of lentils.

Here are some good qualities of my vegan paleo brownies I’d like to emphasise:

How to sprout lentils for those vegan paleo brownies

Honestly, there’s no effort involved in sprouting the lentils. Furthermore, you won’t even need any special jars or other customised equipment. Instead, a bowl, sieve and clean kitchen cloth work wonders.

As you can see sprouting is more about planning rather than hard and complicated work.

Finally, do let me know in the comments below whether you love the recipe! I’d love to hear from you! Please also tag me in social media whenever you make and share my recipe. Instagram @thenutriplanet and Facebook @nutriplanet.health.hub

Watch step-by-step video tutorial under my highlighted stories on Instagram!

For more decadent snack, have the brownies with Vegan Caramel Sauce or Chocolate Sauce.

Tips on my vegan paleo brownies: