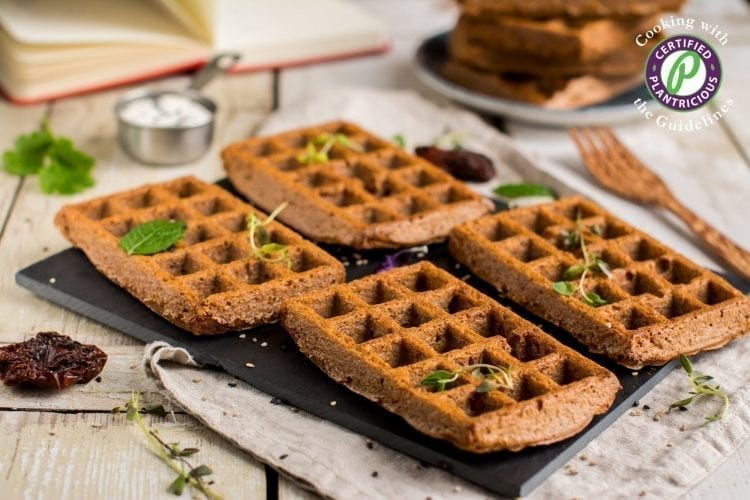 Watch how to make vegan gluten-free potato waffles that are Candida diet friendly, use minimal oil and have delicious pizza flavour as well as crispiness.

I’ve baked so many pancakes over the past few months that I felt I needed a change. As at the same time I craved for something savoury as well, I decided to bake vegan gluten-free potato waffles.

I absolutely love that those potato waffles are Candida diet friendly and almost oil-free (just a little is used to grease the silicone waffle forms).

For your information, I didn’t intend to create pizza flavoured potato waffles at all, but it simply happened. It’s because after adding garlic, onion, oregano and sun dried tomatoes it was pizza flavour all over 🙂 The crispy crust tasted cheesy even without using any nutritional yeast.

My hubby was especially happy with those gluten-free potato waffles and declared them to be the best thing ever. As the potato waffles have enough flavours themselves, they go so well with plain soy yogurt that kind of soothes them a bit.

Needless to say, I only use whole food plant-based components to make my potato waffles.

Firstly, the bulk ingredients are buckwheat and millet groats as well as rolled oats. I use whole grains instead of flours as much as I can to reduce the grains’ glycemic load and make them easier to digest.

Next, I use ground flax seeds as a binding agent and low-sodium baking powder to make the waffles rise a bit.

Finally, as the name of the recipe refers, here come grated potatoes. And our potato waffle recipe is complete!

One thing I love about these vegan gluten-free potato waffles is that they require a lot less hands-on time than pancakes. The total time is more or less the same in both cases, but with waffles you get to do whatever you need to do while they spend time baking or cooling.

Should you prefer your waffles sweet check out my other oven waffle recipes: Millet-Buckwheat Oven Waffles and Plant-Based Oil-Free Oven Waffles.

Disclosure: this post contains affiliate links. As an Amazon Associate I earn from qualifying purchases. For every purchase made from the links in this post, you’ll be able to support my work. So you can look after your health, and contribute to my mission at the same time. Thank you!