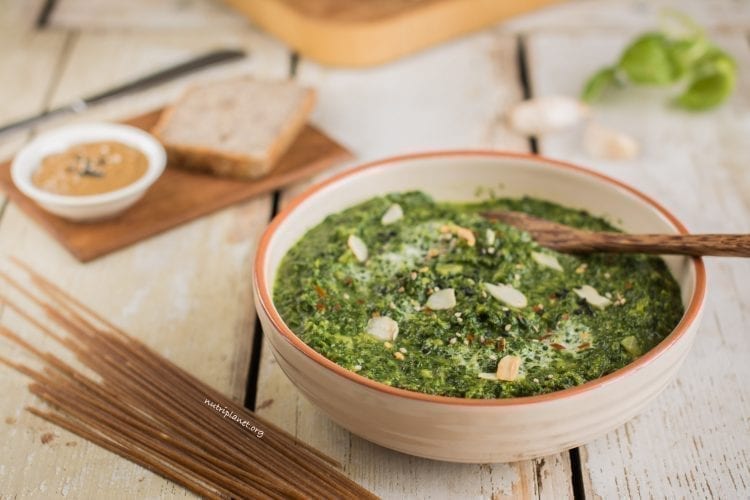 This creamy vegan spinach dip combines the simple, but divine flavours of onions and garlic with the subtle sweetness of coconut and saltiness of spinach. It’s an easy vegan side dish that is ready in less than 15 minutes.

P.S. Don’t forget to watch the short video below where I show you the consistency of this dip.

So, there I was, munching on this tasty and creamy wilted spinach in my favorite vegan buffet in Tallinn, when I knew I had to make this at home!

It was the next day when I bought some frozen chopped spinach and coconut milk to start testing the recipe for creamy vegan spinach dip. I was so happy that it turned out perfectly after the first attempt. My husband and 8-year-old totally approved. Needless to say, the whole thing was gone at one go.

Moving on to the ingredients of this vegan spinach dip, I have to say it’s actually so simple. It’s because when you have onions and garlic with some turmeric, coconut milk and salt/pepper to taste, you can’t go wrong! The spinach just adds to the bomb of flavours and creamy texture.

Should you be among those who don’t like coconut, scroll down and get tips for substitutions. Furthermore, if you’re a lazy cook, you don’t even need to bother chopping all that onion and garlic. Again, move on to tips’ section for more information.

Before all the people who follow low-fat diet for health reasons start to raise their voices, let me say the following:

Now, if we leave the fat content to be, my creamy vegan spinach dip suits most people’s diets as it’s:

Besides all the dietary advantages, this vegan spinach dip is also very versatile in terms of use. You can spread it over a slice of bread, dip raw veggies into it, use over pasta dish, or have as a simple side to complete your meal.

Finally, even those who have just made their first steps in the kitchen can try it out, as the recipe is so easy and quick to prepare.

Please let me know if you make this vegan spinach dip recipe in the comments below and tag me in social media if you share photos of your creation! Instagram @thenutriplanet and Facebook @nutriplanet.health.hub

This creamy vegan spinach dip combines the simple, but divine flavours of onions and garlic with the subtle sweetness of coconut and saltiness of spinach. It’s an easy vegan side dish that is ready in less than 15 minutes.

One serving has 2 GL points.

How to have this vegan spinach dip: