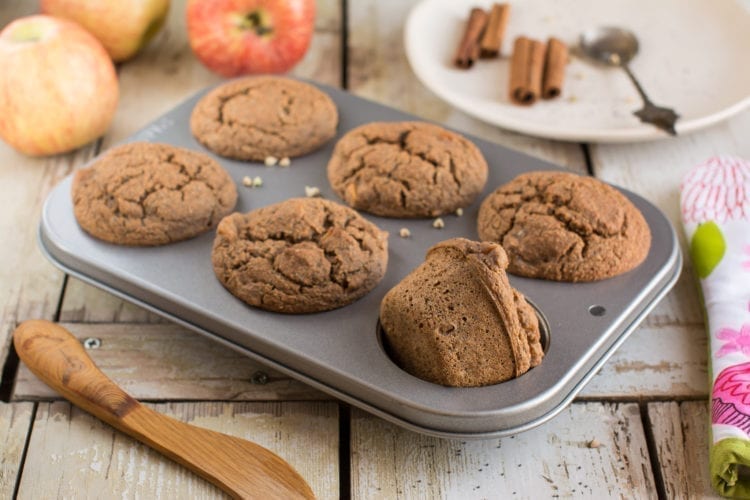 I created these low fat vegan apple cinnamon muffins almost a month ago when I was in Barcelona. So, whenever I make them now, the smell and taste take me back to my second hometown and I sigh longingly 🙂

I had just published vegan gluten-free blueberry muffins recipe before the trip and was quite obsessed with those. However, blueberries cost a fortune in Barcelona, which is why I used that I had in hand. It just so happened that apples were the only suitable fruits in my kitchen the morning I wanted to bake a new batch of muffins. So, I used those, added quite a bit of cinnamon and the result blew me away! Consequently I stuck to those low fat vegan apple cinnamon muffins for our entire stay.

For the first batch I used only buckwheat. However, I wanted to bring the glycemic load of my muffins down and substituted half of the buckwheat with oat bran. As result, one muffin had almost 3 GL points less than before. Awesome, isn’t it?!

To sum it up, my low fat vegan apple cinnamon muffins are almost as healthy as muffins can get. Besides being plant-based and oil-free, they are also gluten-free and sugar-free. Now, oil-free doesn’t always mean low fat. However, in this case I can proudly say that it does, because you only get 19.8% of calories from fat from this muffin recipe. Of course, you could make them even leaner by ditching the peanut butter altogether. In fact, I have tried nut butter free version and they taste equally good.

I created these low fat vegan apple cinnamon muffins almost a month ago when I was in Barcelona. So, whenever I make them now, the smell and taste take me back to my second hometown and I sigh longingly ?