Home / Natural Cure / Probiotics: Benefits, How to Choose, When to Take 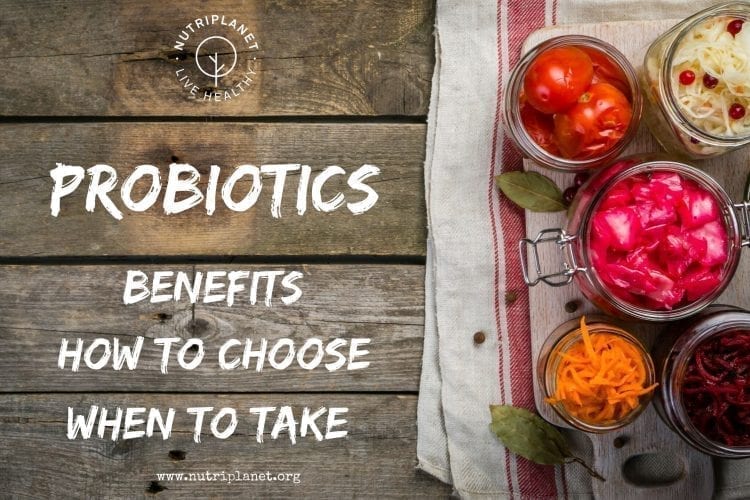 You can get probiotics from supplements, as well as from foods prepared by bacterial fermentation.

Importance of Microorganisms in Your Gut

Probiotics help maintain healthy balance of gut flora and therefore support your immune system. It’s important to fill your gut with good bacteria, like Lactobacillus Acidophilus and Bifidobacteria Bifidum, so that there is no room left for Candida overgrowth.

Some studies also show benefits against inflammatory bowel diseases, such as Crohn’s disease and ulcerative colitis. [5]

What’s more, probiotics may fight Helicobacter pylori infections, which are one of the main drivers of ulcers and stomach cancer. [6]

Probiotics stimulate our immune system by:

Epithelial cells are cells that come from surfaces of your body, such as your skin, blood vessels, urinary tract, or organs. [13]

Certain strains of probiotics cannot only kick-start weight loss, but help you to keep it off.

In a study involving a group of 125 overweight men and women, half of the subjects were given a daily probiotic supplement containing Lactobacillus rhamnosus, while the other half took a placebo. All of the subjects underwent a weight loss program for 12 weeks, followed by a 12-week maintenance program. The women taking the probiotic supplement showed an average weight loss of 4.4kg, while the women receiving the placebo lost only 2.6kg. [20]

B vitamins are a group of vitamins largely responsible for helping your body to break down food into energy. It’s now been shown that certain strains of probiotics are able to synthesize water-soluble vitamins such as those included in the B-group. The most notable of these are folate, riboflavin and vitamin B12, among others. [22]

Eating foods containing typical probiotics such as Bifidobacterium and Lactobacillus can produce B12 and other B-vitamins. The most well known producer of B12 is Lactobacillus plantarum, which is used in many probiotic products, and is naturally found in human intestines.

As with mood regulation, probiotics also help to improve sleeping patterns by producing and regulating a number of neurotransmitters and hormones involved with restfulness.

Probiotics can increase blood levels of tryptophan, an amino acid that converts into serotonin and then into melatonin. This is the hormone involved with your feelings of wellbeing.

Gut microbes are also in involved serotonin production, which not only regulates mood but also plays a major role in sleep quality. Research has shown that serotonin deficiency in rats leads to disrupted circadian rhythms and sleep-wake cycles, which typically means restless sleep. Most serotonin in the body (over 90%) is manufactured in the gut. [23]

The gut is intrinsically linked to the brain. It’s also known that the neurons lining your gut can play a major role in your mood. These neurons produce serotonin, a neurotransmitter linked to mood.

A study assessing the effect of a combination of Lactobacillus helveticus and Bifidobacterium longum on both human subjects and rats showed that these probiotics reduced anxiety and had beneficial psychological effects, including a decrease in serum cortisol. [24]

Other Health Benefits of Probiotics

Yogurt (non-GMO soy, coconut, oat, cashew), fermented foods such as sauerkraut and kimchi. You need to make sure that it is raw and not pasteurized as pasteurizing kills all the good bacteria.

Sometimes it’s not enough to eat probiotic foods to help the good bacteria rule your gut. This is true, if you’ve had a course of antibiotics or are struggling with Candida overgrowth.

Antibiotics kill many of the good bacteria in your gut. That leaves space and nutrients for harmful microorganisms like Candida albicans, so that they can multiply and spread. Researchers have found that, even six months after taking antibiotics, a large number of important probiotic strains are completely missing from the gut flora. An imbalanced gut leads to inflammation and weak immunity, and may contribute to more serious longer-term health problems.

What you need to keep in mind when choosing your probiotic supplements:

It’s best to choose a probiotic supplement that contains a variety of well-researched strains that have been shown to benefit the gut. [26]

Each strain of probiotic bacteria functions slightly differently and has different benefits for the body. They’re also concentrated in different places throughout the digestive tract.

A good probiotic should contain at least 5 billion CFUs (colony forming units) per dose in order to provide maximum benefit.

Here are some examples of different functions of probiotic bacteria:

Also, Enterococcus faecium have been shown to provide functional benefits in the treatment of Salmonella infections. [29]

Some of the best bacterial strains to look for in a probiotic are:

Lactobacillus acidophilus is a type of bacteria found in your intestines. It’s a member of the Lactobacillus genus of bacteria, and it plays an important role in human health. [30]

Key features on L. acidophilus include:

In addition to probiotic supplements, L. acidophilus can be found naturally in a number of fermented foods, including sauerkraut, miso and tempeh. Also, it’s added to other foods like cheese and yogurt as a probiotic. [35]

Lactobacillus plantarum (L. plantarum) is a rod-shaped, gram-positive lactic acid bacterium. It is commonly found in the human and other mammalian gastrointestinal tracts, saliva, and various food products. [36]

Lactobacillus plantarum is one of the most versatile of all probiotics, and commonly used in making fermented foods like kimchi, pickles, sauerkraut, and even sourdough bread.

This beneficial bacteria has been shown to be effective in inflammatory bowel disease (ulcerative colitis and Crohn’s) as well as irritable bowel syndrome (IBS). It is also excellent at fighting bacteria and yeast that cause us problems, such as E. coli and Candida albicans.

Here are some key factors of L. plantarum:

Lactobacillus casei helps the body produce lactic acid that aids in lowering the pH levels in the digestive system, which in turn helps to reduce the growth of harmful bacteria. This probiotic helps to regulate the immune system of the digestive system by binding to the surfaces and stimulating the GALT system (gut associated lymphoid tissue).

L. paracasei has powerful antibacterial properties and can impede the growth of common pathogenic agents including E. coli and Candida albicans, as proved in a study where researchers fed mice fermented milk that was laced with L. paracasei. It was found that their gut microflora was improved and that the colonization of Candida was inhibited. [38]

Make sure the probiotic bacteria are viable. Many probiotic formulas use inactivated bacteria. While some functionality has been found for non-viable bacteria to provide health benefits, the common agreement is that they are no substitute and are unlikely to be as effective as viable bacteria. [39]

Now, enteric coated tablets and capsules have been shown to supply protection against the harsh gastric environment. Those coats are pH selective and dissolve in the alkali media of the intestinal system.

Other excipients that survive the acidic environment of stomach and have been used for probiotic delivery is carboxymethyl high amylose starch. [40]

In case of controlled-release system like BIO-tract, the tablets will release their probiotic bacteria slowly over the course of 8-10 hours. This means that the majority will end up in your gut, no matter what time of day you take them. Delivery systems like this take a lot of the stress and decision-making out of taking your probiotic. It also makes life easier when you’re traveling, on the road, or just have a busy life to manage.

Rule 4: What is the Probiotic Free From

Look to see if the product is free from all the main allergens, such as gluten, dairy, soy, corn, peanuts, yeast or other ingredients for which you may have intolerance.

Low-cost binders, such as magnesium oxide or zinc oxide, can dramatically reduce the bioavailability and absorption of supplements.

Avoid titanium dioxide – widely used as a colorant in supplements and throughout the cosmetic industry, titanium dioxide has recently been classified by the International Agency for Research on Cancer (IARC) as an IARC Group 2B carcinogen “possibly carcinogenic to humans.” It is best to avoid products that have this ingredient.

The Best Time of Day to Take Probiotics

Let’s see how you can boost the effectiveness of probiotics by taking them correctly.

Your lower gastrointestinal tract is where probiotic bacteria are most effective, but they need to be alive when they reach their destination. Not such an easy task if you consider that they need to pass your highly acidic stomach with pH 2- 3. They also face digestive enzymes including pepsin (which breaks down protein).

The bacteria that do survive will then continue down to the small intestine, where they meet more digestive enzymes: amylase, lipase and protease as well as bile. Some studies show that the survival rates for certain strains of probiotics are only 20%.

Research also shows that probiotic supplements in vegetable capsules only deliver 4% of their bacteria past stomach acid. The best approach, as demonstrated by multiple research studies, is to take your probiotic when your stomach contents are at their least acidic. This gives your probiotic bacteria the greatest chance of successfully arriving where they need to be. A meal containing healthy fats will aid in further protecting the probiotic bacteria from your stomach acid. [41]

When to Take Probiotic Supplements

According to the study “The Impact of Meal on a Probiotic During Transit Through a Model of the Human Upper Gastrointestinal Tract”, where a fake digestive tract was built with real saliva and digestive enzymes, acid, bile, etc., the conclusion was that probiotic bacterial survival was best when provided within 30 minutes before or simultaneously with a meal or beverage that contained some fat. [42]

If you take a probiotic that uses a controlled-release system like BIO-tract, the time becomes less of an issue. Whether you take your probiotic with food or not, the tablets will release their probiotic bacteria slowly over the course of 8-10 hours.

It’s important to leave at least two hours between taking your probiotic supplement and taking your antibiotic. That avoids any chance of the antibiotic killing the probiotic bacteria before they reach your gut.

The same goes for any other supplements with antibiotic properties, such as olive leaf, oregano oil, or caprylic acid. Make sure that you leave 2 hours between taking your antifungal and your probiotic.

Disclaimer: this post contains affiliate links. As a Balance One affiliate I earn from qualifying purchases. You can support me delivering quality content by purchasing through those links. Thank you!