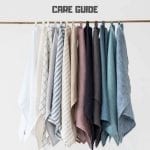 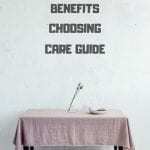 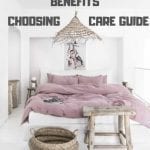 I bet you’ve heard of linen fabric and maybe you’re even wearing it! However, did you know how linen is made, what are the benefits, or what to look for when choosing good quality linen products? Furthermore, are you caring for your linen items correctly? Find out!

What Is Linen Fabric?

Linen is a textile made of the cellulose fibres that grow inside of the stalks of the flax plant, Linum usitatissimum. Flax is one of the oldest cultivated plants in human history.

Here are the main reasons why linen has remained so popular over the years:

The flax fibre, from which linen is made, is hollow and absorbs moisture well – up to 20% of its own weight in water before starting to feel damp. The latter is especially important when it comes to towels, bath linens, bedding as well as clothing.

Besides absorbing moisture well, linen is able to release it fast. The flax plant is hollow allowing for higher air permeability. Thus, linen fabric dries out quickly and doesn’t stick to the body. Linen is also a natural insulator, i.e. it keeps you cool in the summer and retains heat from your body when it’s cooler. The reason is flax’s long polymers that have the best heat resistance and conductivity of all the commonly used textile fibres.

Linen fabric possesses rare bacteriological properties – it is a natural antiseptic, kills bacteria and fungus, and reduces inflammation. Taking the latter into account, some claim that linen heals wounds faster and helps cure some skin diseases. Most importantly, linen is perfect for those with sensitive skin or allergies.

Durable and Easy to Care For

Furthermore, the bast fibres’ characteristic nodes (weak points that are distributed randomly along the length of the fibre) make linen fabric flexible without being brittle. Fabric made from hand-harvested flax is especially fine and supple.

Products Made of Linen Fabric

Flax fibres are used to make all sorts of products from rope to high-quality clothes and bedding.

Linen bedding, i.e. duvet covers, flat and fitted sheets, pillowcases, bed skirts, blankets. When choosing a perfect bedding, you need to consider the fabric, the weave, and the thread count. Find out which is a perfect match for you – linen, sateen or percale.

Linen bath linens include towels, bathrobes and even laundry bags.

When choosing bath towels, consider of your personal preferences – are you into light, fluffy towels or heavier, denser option? Check grams per square metre (gsm) – the higher the gsm, the heavier the towel.

Pay attention to the fabric as well – cotton is most common with linen coming in the close second, and linen-cotton blend being a strong alternative.

Also, think of what sizes of towels you need.

Choose between terry and waffle towels. Read more on How to Choose the Best Bath Towels.

How to Properly Care For Your Linen Items

Let’s start by taking off the ease – high-quality linen fabric is sturdy and durable on its own, so you won’t need to slave away tending to its whims. However, here’s how you can make the most out of your beautiful linen items:

Linen items can be both hand and machine-washed – your linens won’t stretch or shrink. Should you still witness damage to your items, it may be related to the quality of the fabric or chemicals used. The general rules are as follows:

It’s fine to tumble dry on low heat. Otherwise, hang or lie flat to let the garment to dry.

Stains must be removed immediately. Otherwise it’ll absorb deep into the fibres and it’d be very difficult to remove. Soak in a water-detergent solution or wash it with club soda. Alternatively, gently massage some dish soap onto the stain until it comes out. The trickier stains should come out by sprinkling some baking soda and vinegar on them.

If you don’t like the natural wrinkly and worn look of linen, you can iron your items using a medium-hot iron while it’s still damp or overlay it with damp towel.

Make sure your linen items and completely dry before storing them away to avoid mould. Store them in a cool, dry place away from direct sunlight. Avoid storing linen in plastic bags. See full Linen Care Guide.

How to Choose a High-Quality Linen Fabric

In order to understand what makes a good quality linen fabric, you first need to understand how linen is made. So, let’s dive a little deeper into the production process.

It All Begins With Flax Plant

Flax plant is cultivated around the world not only for its fine, strong fibres, but also for its seeds, which are rich in nutrients such as dietary fibre and omega-3 fatty acids. Flax oil is also a popular drying oil amongst oil painters.

It was one of the first plants domesticated by humans and has lasted well into 21st century due to its unmatched natural properties (read the benefits of linen above).

Cultivated primarily in cooler climates all over the world – from Western Europe to India and Pakistan – flax plant has a growing cycle of only 100 days. However, the journey from the seed to woven linen fabric is a laborious and complicated process. The latter explains why linen is considered a luxury item and comes with a higher price tag as compared to cotton and other textiles.

Linen is typically sowed in March and harvested in July, except in warm countries, where it is sown in the winter so that harvesting can be undertaken before the heat of early spring. The reason is that flax plant flourishes in cool, damp environments and cannot tolerate extreme heat. Within the 100 days of its life cycle, you can witness a magical transformation – the ephemeral bloom when the whole field turns sky blue for just one day.

Once the bloom is over, the flax plant is harvested. Flax is ready to be harvested for its fibres when the stem begins to turn yellow and the seeds turn brown. On some farms however, the plant is harvested prior to seed germination. This yields exceptionally fine fibres, but leaves the grower without any seeds.

However, unlike most other crops, flax plant cannot be mowed – it has to be pulled up by the roots to maximise the length of fibres. Those valuable fibres run the length of the stalk all the way into the roots, so pulling up the plant by the root increases the length of the fibre produced. This practice also prevents the plant sap from leaking out of the cut stalk. The latter dries out the fibres and results in poorer-quality fabric.

Machine harvesting of flax is still unable to preserve the root system. So, despite the extremely laborious process of manual harvesting, the highest quality linen fabric is still made from flax plants that were pulled out by hand. Fabric made from hand-harvested flax is finer, suppler, and more highly priced. There is another reason for pulling rather than mowing – it is to preserve the full potential of the plant. The latter is important because it’ll be used to make a variety of different products.

After harvest, flax stalks are allowed to dry in open air for several weeks before they undergo threshing, i.e. removal of seeds from the stalk by crushing open the dried seed pods.

Next, the dry stalks go through a process called retting, i.e. exposing it to moisture in order to separate the fibre from stem. It’s the same as rotting – with the same awful smell! The flax plant is soaked in water until existing bacteria breaks down the pectin holding the fibres together. This is a bit risky because under-retting burdens the separation whereas over-retting weakens it.

Then the straw (retted stalks) is dried mechanically or in natural air, and is then usually stored for anywhere from a few weeks to months in order to allow curing to take place.

Now it’s time for scutching – a process where the brittle straw is passed through rollers that crush the woody stalks that still cling to the bast fibres into smaller pieces that can be more easily removed. Scutching involves scraping a small wooden knife down the length of the fibres, pulling the broken woody bits away. This is a labour-intensive process. One person can produce only about 15 pounds of flax fibres per day; or less if the fibres are coarse, hard, or have been poorly retted.

The separated bast fibres are next heckled, or combed through a bed of nails that splits and polishes the fibres, and removes the shorter tow fibres from the mix.

Those short coarse flax fibres (tow) are used to make paper, twine, rope, or low-quality linen products. The longer fibres are called line and are used to create linen yarn that goes into clothing, bedding, and other high-quality textile products. Those fibres can sometimes be as long as three feet and are ready for spinning.

The separated flax fibres (stricks) are traditionally spun by hand using a distaff. A distaff is a long vertical pole that attaches to a spinning wheel from which the fibres are hung.

Spinning involves twisting together the drawn out strands of fibre to form yarns, then winding the yarn onto a bobbin, or spool.

Flax is always spun very finely (especially the longest of the fibres), resulting in a thin yarn. In order to create a thicker yarn, multiple skeins of this thin yarn can be spun together.

Linen yarn is generally woven into sheets, a process wherein multiple threads are interlaced both horizontally and vertically on a loom. Occasionally, linen yarn is also knit, or formed into fabric by creating consecutive rows of loops that intertwine with one another.

The yards of fabric can then be bleached and/or dyed. Finally, linen can be stone washed for maximum softness. Recently, however, enzyme wash is becoming more popular – it gives the same effect without the use of actual stones.

How to Choose High-Quality Linen

To sum it up, here are the main aspects to remember when choosing high-quality linen:

Disclaimer: this post is sponsored by the amazing Lithuanian linen company MagicLinen who’s products are featured on the photos. MagicLinen’s products are Oeko-Tex certified. Read more on what is Standard 100 by Oeko-Tex.

Also, thank you DeckTowel for detailed information on how linen is made!