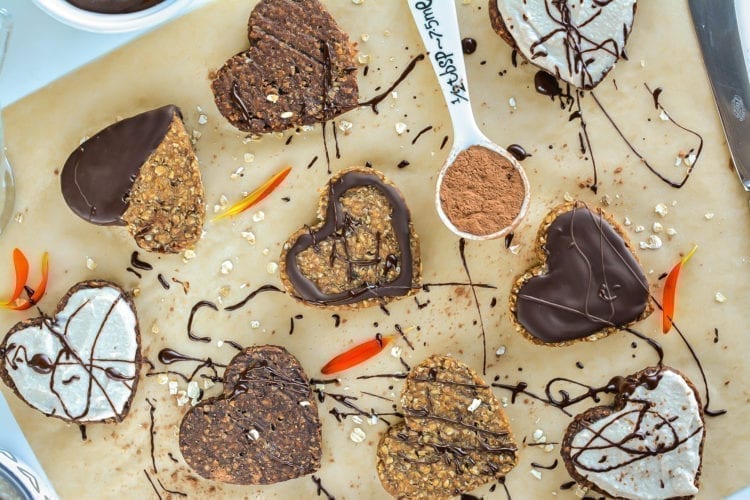 It’s Valentine’s Day on Sunday – I think you’ve noticed all the heart-shaped food, decorations and much more in shops, supermarkets, cafés etc. In my version, I will deserve chocolaty valentine’s day oat-banana cookies.

I guess people usually don’t reflect on history of Valentine’s Day – sadly, it has turned into a commercial event, often making people feel forced to buy those hearts – again! However, preparing the presents or treats yourself makes the day most certainly special and different. I guess the gift must come from the heart, if one is prepared to spend time on preparing it, don’t you think?

One legend goes that Valentine was a Roman priest who lived during the third century. When Emperor Claudius II decided that single men made better soldiers than those with families, he put marriage under a ban for young men. Valentine, realizing the injustice, defied Claudius and continued to perform marriages secretly. When Valentine’s actions were exposed, Claudius ordered that he be put to death.

Other legend suggests that Valentine may have been killed for attempting to help Christians escape Roman prisons. According to one legend, an imprisoned Valentine actually sent the first “valentine” greeting himself after he fell in love with a young girl who visited him during his imprisonment. Before his death, it is claimed that he wrote her a letter signed “From your Valentine,” an expression that is still in use today.

Some believe that Valentine’s Day is celebrated in the middle of February to commemorate the anniversary of Valentine’s death around A.D. 270. Others allege that the Christian church may have decided to place St. Valentine’s feast day in the middle of February in an effort to “Christianize” the pagan celebration of Lupercalia. Celebrated on February 15, Lupercalia was a fertility festival dedicated to Faunus, the Roman god of agriculture, as well as to the Roman founders Romulus and Remus.

Lupercalia was put under a ban at the end of the 5th century and Pope Gelasius declared February 14 as St. Valentine’s Day. It was not until much later when the day became associated with love. During the Middle Ages, it was believed in France and England that February 14 was the beginning of birds’ mating season, which added to the idea that Valentine’s Day should be a day for romance.

While Valentine greetings were already popular during the Middle Ages, written cards didn’t appear until after 1400. The oldest known valentine that still exists today was a poem written in 1415 by Charles, Duke of Orleans, to his wife while he was confined in the Tower of London.

In Great Britain, Valentine’s Day began to be popular around the 17th century. By the middle of the 18th, it was common for friends and lovers of all social classes to exchange small tokens of affection or handwritten notes, which were replaced by printed cards by 1900.

Today there are several ways people celebrate St. Valentine’s Day – hand-made or store-bought cards, bouquets, chocolate, cake, cookies etc. At the same time I know people who choose to avoid the day entirely just because of its commercialization and remember their friends and loved ones on another day when they’re not supposed to do it, thus making the gift more meaningful.

I find it quite sad when holidays that originally have a sweet meaning get turned into a stressful period when people feel obligated to behave in a certain manner forgetting the true meaning of the tradition altogether; Christmas being the best example.

However, I still decided to bake heart-shaped cookies because Valentine’s Day is so very popular and because I want to make something delicious and nice-looking to my dear ones.

My whole food plant-based, oil-free, sugar-free and even gluten-free (if you use gluten-free oats) Valentine cookies are so simple, delicious and easy to make that no one should find an excuse to go to a store to search for a treat or gift when you can so easily make your own.

And finally, please let me know in the comments below if you love this chocolaty oat-banana cookies. Please tag me in social media whenever you try one of my recipes! I’d love to see your creations! Instagram @thenutriplanet and Facebook @nutriplanet.health.hub

It’s Valentine’s Day on Sunday – I think you’ve noticed all the heart-shaped food, decorations and much more in shops, supermarkets, cafés etc.