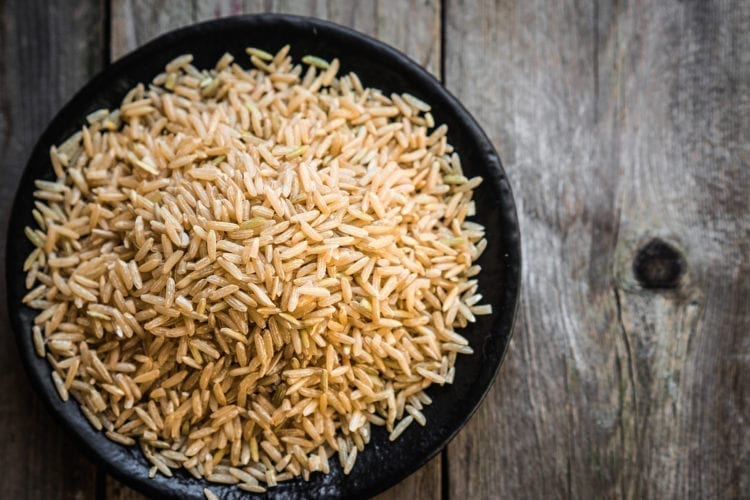 Learn the dangers of arsenic in rice, what are arsenic poisoning symptoms, which are the most contaminated foods, and how to reduce the arsenic exposure.

All You Need to Know About Arsenic in Rice

If you prefer listening to reading, feel free to watch the below video:

Arsenic (As) is a naturally occurring element of the earth’s crust that can be found in small amounts throughout the environment. This type is called organic arsenic.

However, arsenic also can be released into the environment as a by-product of agricultural or industrial processes as highly toxic inorganic arsenic.

While inorganic forms of arsenic are more toxic, it doesn’t matter which form you’re exposed to. Meaning, exposure in high levels for an extended period of time can still have negative side effects on humans.

How You Can Be Exposed to Arsenic

There are several ways you can become exposed to arsenic:

Inorganic arsenic is naturally present at high levels in the groundwater of a number of countries, including Argentina, Bangladesh, Chile, China, India, Mexico, and the United States of America.

Foods that contain traces of arsenic include meat, poultry, and fish. Normally, poultry contains the highest level of arsenic. It’s due to antibiotics in the chicken feed. Rice also contains higher levels of arsenic than water.

It’s noteworthy that only 10% of airborne arsenic makes it into circulation. At the same time, our bodies absorb 90% of waterborne arsenic.

Why is Arsenic Harmful for Humans?

Studies have demonstrated that drinking enough inorganic arsenic over a long enough period of time can be dangerous. Namely, it can lead to non-melanoma skin cancers, and cancers of the bladder, liver, kidney and lung.

On the other hand, long-term exposure can cause chronic arsenic poisoning. The latter manifests itself through skin lesions and skin cancer.

Long-term exposure to arsenic can cause more severe symptoms. You should seek emergency help if you experience any of the following after a suspected arsenic exposure:

Futhermore, those with higher arsenic levels tend to have higher rates of food allergies, tend to not sleep as well, tend to not feel as well.

Urine tests should be carried out within 1 to 2 days of the initial exposure. These tests can also be used to help diagnose cases of apparent arsenic poisoning.

Tests on hair and fingernails can determine the level of arsenic exposure over a period of up to 12 months. These tests can give an accurate indication of arsenic exposure levels. However, they do not show what effects they may have on the person’s health.

How Does Arsenic Get in the Rice?

Mainly, the toxic inorganic arsenic comes from pesticides. Considering the latter, we could assume that organic rice has less arsenic than conventionally grown rice. However, this is not true.

It’s because arsenic pesticides were banned 30 years ago. Nevertheless, 30,000 tons of arsenic chemicals already got dumped onto cotton fields in the southern states. So, it’s clear that there are still arsenic residues. That’s why they specifically choose arsenic-resistant varieties of rice plants in the South. However, humans haven’t become arsenic resistant.

How Much Rice is Safe to Eat?

Arsenic in rice is a cause for concern, according to a consensus statement by the European and North American societies for pediatric nutrition.

If your only source of rice is just rice, then it recommends no more than one or two servings for the whole week. For example, 1 serving is ¼ cup of uncooked rice or 1 cup of rice milk.

For the exact table with recommended servings of different rice products go here.

The most contaminated rice products are:

Rice vinegar doesn’t seem to be anything to worry about.

How to Reduce Arsenic in Rice and in Your Life

There are several ways you can reduce arsenic in the food that you consume daily.

Which rice has the most and the least of arsenic

First of all, it greatly depends on the soil the rice was grown on. Extensive recent testing by the FDA found that long grain white rice, which is what most people eat, appears to have more arsenic than medium or short grain rice. However, this can be due to the fact that most of the short grain rice is grown in California which has significantly less contaminated rice paddies than those in the South, such as in Texas or Arkansas, where most of the long grain rice is grown.

Red and black rice, on the other hand, may contain even less arsenic than white rice. More precisely, coloured rice samples purchased mostly in the United States were better than brown or white. Yet, a dozen samples of red rice purchased in Europe were as bad, or even worse, as brown rice.

The main ways to reduce arsenic in your diet:

How to cook rice to reduce its arsenic content

Here are easy steps for cooking rice to reduce its arsenic content by a whopping 60%:

My Experience with Arsenic in Rice

In the summer of 2015 it had become my habit to consume rice cakes every evening as a late night snack or a dessert. Mainly because I thought it was a healthier alternative to sweet treats. So, I had approximately 6 cakes every day.

Now, Consumer Reports recommends no more than 7 points worth of rice products per week. Simple calculations show that I got 5 points daily, i.e. 35 points weekly. And that is 5 times more than recommended (just from the rice cakes).

According to Swedish National Food Agency rice cakes are not at all recommended to give to under 6-year-olds. The reason is that the level of arsenic is the highest in those dry cakes. They said that it is dangerous for young children to consume even 2-4 rice cakes per week.

My symptoms of arsenic poisoning

In the middle of September I started to feel weird – I couldn’t really point a finger on anything particular. I just felt strange and tired. By the end of September I had:

One night when I tried to stand up to go to toilet I simply couldn’t because I wasn’t able to differentiate between the floor and the ceiling. Consequently, I just had to lay down again.

That episode really made me worry and I suddenly remembered the article about arsenic in rice I had read a few weeks prior. So, I started to search for symptoms of arsenic poisoning and immediately recognised my own ailments.

I ditched all rice and rice cakes immediately and I felt well after 2-3 days with no symptoms left.

Conclusion About Arsenic in Rice

Considering the above, stay on the safe side and remember the following simple tips: